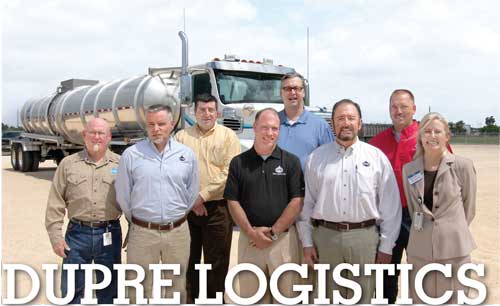 It’s one of those cases of hiding in plain sight. Many of us have passed one of Dupré Logistic’s trademark white trucks with their blue liquid-drop logo emblazoned on the doors and tankers without it registering on our consciousness. What most people do not realize those trucks are a part of a company which is an acknowledged leader in truck transportation, especially in energy and hazmat logistics services.

“We are one of the best-kept secrets in this area,” said Earnie Seibert, Dupré’s Vice-President of Sales and Marketing, during an interview at the company’s Lafayette, Louisiana., headquarters. “We pride ourselves on our industry recognized safety record. We are leaders in energy and hazmat logistics services in North America. It’s down into our DNA from who we are as an organization,” Seibert explained. Instead of simply operating as a traditional trucking company, Dupré has taken the lead in the safety and training arenas.

Using its employee safety programs as a catalyst for growth and not just an afterthought instituted to meet regulatory requirements, the company has created a progressive, award-winning environment that has kept it growing and vibrant, even through the recent and ongoing economic turmoil.

Immersed in the oilfields

When you talk to Seibert, it’s hard to realize at first the fact he works in the trucking industry. He speaks about the company’s operations at Eagle Ford. He talks about the challenges in growing pipeline delivery across the nation’s center. References to shale plays and pipeline projects crop up continuously as he discusses Dupré’s growth in mid-stream transport and future directions.

Even as efforts continue to bring more capacity and flexibility to the nation’s pipeline infrastructure through the Keystone XL and other smaller projects, Dupré is focused on the long haul – or, more literally, the growth of the short haul for bulk crude and gas loads as pipeline capacity makes Dupré’s method of delivery more economically viable. “You’re still going to have to gather the oil and bring it to a central point to put it into pipes, because you aren’t going to be able to connect to all of the wells and the rest of it,” Seibert said of the move to increase pipeline delivery to energy hubs. “So, we see it as a positive. It fits better into our model. We’re doing well with the longer length of haul, but this model will fit better for where we are really strong.”

That shorter haul also eliminates one of the biggest dangers in trucking, the physical demands of marathon-length runs across the nation’s interior on both drivers and equipment. “What it is going to do is reduce the length of haul, which will decrease the wear on equipment and drivers,” Seibert said. “What it does for a company like ours that excels at the maximization of utilization of equipment, it should play in our favor.”

He also points out the fact trucking’s other land-based competition, rail, is limited in much the same way as pipelines, meaning the short haul market makes even more sense for his industry. “A lot of people are also talking about rail,” Seibert said. “The problems you have with rail are, firstly, how much track can you get close, which in turn would force them to use trucks to get the oil from the fields to the rail spurs. And, secondly, there is an ongoing shortage of a supply of tank cars for the rail. They were out almost two years. I think this specific build time has shortened to some extent; however, there still is not enough capacity to shift over.”

For Al Lacombe, Dupré’s Director of Safety and Training, the company’s success is intertwined with its safety philosophy. “We operated last year over 43 million miles,” Lacombe said. “We’ll continue to grow our company, continue to provide a safe work environment for our people and have a big focus on driver training as an continuous mission.” And, it is specifically this ongoing training which distinguishes Dupré Logistics to achieve beyond the usual break room briefings and bulletin board posters. The company holds mandatory safety training for all of its employees, from the top down, and has a zero tolerance policy for absences. Lacombe’s safety staff travels across the company’s terminals to insure every employee is kept apace of the latest industry initiatives.

“We make sure that we send a field safety rep to every destination where we have terminals to meet up with drivers in order to accommodate their work schedules, as well as, customers at their specific locations,” Lacombe said. “Sometimes this means going out and doing quarterly safety meetings at any time day or night. We put together a safety-related topic which runs approximately 50 to 55 minutes.”

The emphasis moves beyond those hour-long sessions, though. Each Dupré driver takes continuous course instruction on safe driving and will be tested on a regular basis. Instead of simply holding a commercial driving certification, Dupré drivers also complete ongoing evaluations to make sure their driving techniques stay sharp. On a larger scale, though, Dupré has also been active in the larger safety community, helping to inform regulators about what works in the field and what does not. Lacombe says that interaction has been essential to the company’s overall success. Instead of remaining in a reactive mode and trying to accommodate ill fitting regulation, Lacombe credits Dupré Logistics emphasis on safety in conjunction with a proactive mindset to benefit its operation to consistently stay safer and be smarter.

“There are hundreds of thousands of motor carriers on the highway today,” Lacombe said. “Some of these carriers may look at the regulations as a hindrance holding them back and keeping them from going out and meeting their customers. Our company leadership has allowed our entire safety department and myself to participate in the regulatory community as active members of the American Trucking Association’s councils. Two key areas in which I personally participate are the regulations committee and the hazardous materials committee. We meet two or three times a year to review what is happening within these programs.”

Where the rubber meets the road

Another aspect of the Dupré safety initiative is the direct monitoring and observation of drivers in the field. Each Dupré vehicle has GreenRoad safety technology installed, which provides drivers with instantaneous feedback on their driving through a simple panel of lights. The red, yellow and green telltales let drivers know when they are operating both safely and efficiently. The system can also provide supervisors with real-time data on how any vehicle is being driven. “It’s the risk you run whether you are on the rails, on the road or in the air,” Seibert said of the potential for accidents, especially with the ecologically dangerous and often hazardous loads Dupré hauls. “What we try to do is work with our people before an event happens, to be proactive, rather than reactive.” Lacombe echoed Seibert’s point, specifically focusing on the scale of Dupré’s safety emphasis.

“We put out a safety bulletin to every employee in our company, an update of how we are doing in every aspect of our company from safe service to profitability,” Lacombe said. “We require 100-percent attendance at our initial meetings and average 96 percent across the company. Our field safety rep has 30 days to catch up the three or four percent in order to make sure it happens. Everybody gets the exact same message, and it is consistent across the board.” The numbers bear out Dupré’s investment. In the company’s Federal Motor Carrier Safety Administration report, there are astonishingly low failure rates for both the company’s employees and its equipment.

With more than 1,000 inspections in each of four categories, the company has less than 5 percent failure (out of service) rate for vehicles, and less than 1 percent out of service rating each on hazardous material placards and hazmat inspections. The driver out-of-service rate is so low that it shows up as a zero on the federal report. As with any business, the efforts that drive revenues usually get the most emphasis. What Lacombe preaches, to anyone within earshot, is that setting your business on a safe foundation makes all of the other success possible. Accordingly, in the Dupré Logistics corporate philosophy, profits do not happen without safety. “

You can look at this two ways,” Lacombe said. “You can look at it as a hindrance and just a pain in your side, or, you can embrace it… understand it and learn to work the program while making needed adjustments. Like any other program we’re going to have to make necessary revisions. We actively listen to our drivers’ and include their feedback as part of the solution, rather than the problem.”

Lacombe has been with Dupré Logistics for more than 30-years. But, it is as a leader of the company’s safety program where he has truly found his niche. The premium the company places on safe operations has brought it attention at higher levels as well, allowing Lacombe to have a seat at the table when industry policy is being discussed and created. “We’ve had them listen to us, both here, as well as in Washington, where they say, ‘You know, from an industry perspective, we get a better picture when you show us these kinds of things,’” Lacombe said.

He cited one program as an example of how he was able to have an effect on legislation and regulation because of Dupré’s proactive stance and reputation with regard to safety. “One of the things which caught a lot of attention in our industry is the CSA (Compliance Safety Accountability) program,” Lacombe said. ”A lot of folks in our industry are fighting it tooth and nail. We look at it as an opportunity. The government is trying to enhance these programs, to make it better, to continue to reduce crashes on the highway and make our highways safe.” It probably doesn’t hurt his standing and voice at the table that Lacombe was also named the American Trucking Association’s safety director of the year in 2011, although he sees that as working the other way around. “I was able to win that award due to the way our company does business,” Lacombe said. “Without the support and effort our owners put on safety, none of this would happen.”

Dupré safety policy not only applies to its own drivers, but to those companies or individual contractors it does business with as well. It also applies to its clients. According to Seibert, the company has turned down business if a client’s safety standards did not meet Dupré’s requirements. “The problem is when you try to circumvent the system by taking shortcuts, you really are open to more exposure from a liability and a risk standpoint. This is increasingly limited if the rules are followed and performed correctly.

Reggie Dupré started his namesake bulk hauling company in 1980 with the intent of supplying his own fuel to his service station. Starting with two trucks – one to run delivery, and one for parts – he began moving his own product to his pumps. Soon other independent vendors approached Dupré about helping them keep their stations supplied.

The fledgling company purchased Fogleman Truck Line in 1986 to begin its expansion. From its roots in Louisiana, Dupré expanded geographically into Arkansas, Texas, Mississippi, Tennessee and Oklahoma. Even as its reach as a hauling company grew, other services were added to make Dupré a full-fledged logistics company capable of handling every stage of a client’s logistic needs on almost any scale.

Today, Dupré Logistics employs more than 1,000 drivers operating nearly 500 trucks. The company also maintains a network of almost 2,000 carriers, each of which must meet the company’s high standards for safety and service and operates across the continental United States and into Canada and Mexico.