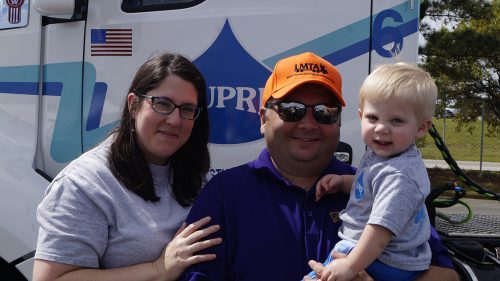 Scotty Reynolds joined the Dupré team in June of 2006 as a driver for our Energy Distribution Services group in Collins, Mississippi, a satellite terminal for Jackson Energy. He has worked his way to become the Director of Safety, based in Baton Rouge. Scotty is passionate about his own family, as well as his Dupré family.

Just before he joined Dupré, he was an over the road truck driver for JB Hunt and Swift, but before that he was an Emmy nominated videographer in television news – in Hattiesburg, Mississippi, Tulsa, Oklahoma and in Columbus, Georgia. He spent much of his time chasing storms and breaking news. “Chasing storms could be exciting but not as exciting as riding with the Hurricane Hunters,” Scotty says having taken a trip with the famed Hurricane Hunters during Hurricane Charlie.

If you’re wondering how Scotty went from chasing tornadoes into trucking, you can thank his dad. On a weekend visit home to Mississippi, Scotty realized his dad was making a lot more money driving a truck than he was making chasing storms and directing television news! “So, I decided right then that I would be a truck driver,” he said.

Scotty’s success in the trucking industry ties into his strong work ethic, evidenced in one of his favorite quotes from Mark Twain:

“Always do the right thing. It will gratify some and astonish the rest.”

He appreciates the family atmosphere at Dupré and says when he worked for bigger trucking companies, he saw that they struggled in getting that sense of home and family that Dupré has. “When I talk to the driver, that driver has a name — not a number,” Scotty said. “I vowed to never treat a driver as a number. I believe getting to know drivers, including knowing them by name, is so important.”

Scotty says that the older he gets, the more passionate he is about getting drivers home.

Scotty puts a lot of effort into trying to get to know each and every driver at Dupré. He encourages them not to rush. “Whatever feelings of anxiety that you have to make up time is self-imposed. A lot of this can be relieved from a simple phone call,” Scotty said. “Nearly every incident we have someone says, ‘I was trying to hurry.’ The deliveries need to get there within a window – a simple phone call and all that stress is gone.”

Scotty lives in Baton Rouge with his wife Sharon and their two-year-old son, Evan. In their spare time, he and his wife explore the region through geocaching, a community treasure hunting game using GPS-enabled devices. Scotty and Evan enjoy a father and son breakfast together every Saturday morning, a tradition they plan to continue for years to come.